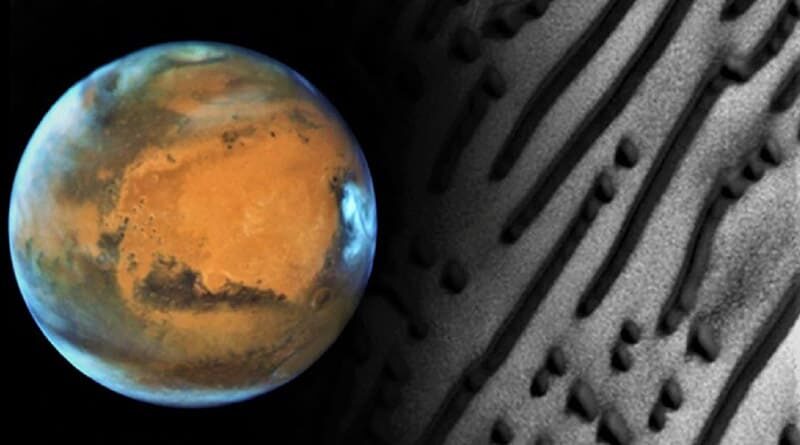 It is not exactly a Martian phrase, even if it recalls the way of speaking of Mork, the fictional alien from the television series of the 70s with Robin Williams.

Morse code on the surface of Mars

But it’s a message from Mars: part of the Morse code interpretation of the dots and lines found in the dark dunes near the Martian North Pole , made by the United States Aerospace Agency, NASA.

It is not the first time that scientists have detected that pattern in the sands of Mars, but the new images, taken on February 6, 2016, show in  greater clarity and detail la topografia unica della regione, che ha permesso di “tradurre” il “messaggio”.

And although they caused an uproar among some UFO believers and conspiracy theorists, the dots and lines formed naturally , in the same way as the dunes here on Earth: sculpted by the direction of the wind. .

In a press release, NASA explained that the marked relief of the patterns in that dune is due to the fact that it is inside a particolare topografia: una depressione circolare probabilmente formata dall’impatto di un asteroide e che ha una quantità limitata di sabbia che può essere trascinata dal vento.

The images have elucidated some of the complexity of the wind patterns on Mars  .

The long “lines” are made up of two-way winds, which means they are winds that blow at right angles against the dune.

Over time, the wind blowing from one direction to the other spreads the material like a funnel in the form of long dark lines  that can be seen in the detailed images.

On the other hand, the “points”, known as  ” barcanoid ” dunes , are a bit more mysterious. The geophysical think they have formed when something stops the production of linear dunes.

But NASA scientists aren’t quite sure what they might be, precisely why they’re photographing the region.

With more observations, geophysicists hope to know more about how dunes form on the surface of Mars and what it can tell us about the likelihood of inhabiting the planet.

As this happens, NASA planetary scientist Veronica Bray translated the message into Morse code and this is what the mysterious sands of Mars say :

Before we get rid of the interstellar dictionary, the message is nothing more than a fun time among geophysicists who take their studies very seriously.

But the serious scientific interpretation of the sands of Mars can help us better understand what it might be like to live on a future base on that planet. Source: www.bbc.com  – www.nasa.gov

SEE ALSO ▶Eugene Shoemaker: the only human being buried on the moon Eugene Shoemaker: the only human being buried on the moon